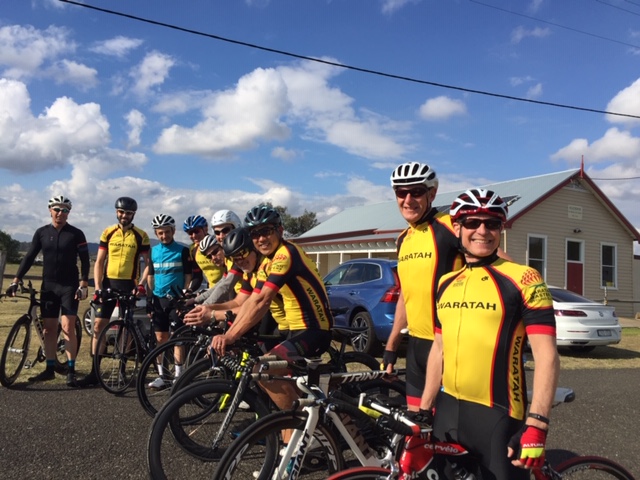 Otherwise known as the race of truth x 4!
Thanks to Paul McKay’s wrangling and persistence (even from his hospital bed) 12 Waratahs made the dash up the M1 to Singleton for one of the most prestigious Cycling NSW events of the year.

Many members of Team Waratah were able to get there a day early for a useful recon of a course that had never been used in competition before.
The challenging course is a 30km undulating loop starting at Glendon Hall with teams setting off at 2-minute intervals. Around 400 competitors – men and women across all grades – took on the challenge.
Chris Fowler, Jeremy Lowes, Sean Vale and Mark Skribins made up one of two 180+ teams and collected silver with a time of 46:54 (just 53 seconds behind the winners and favourites MWCC).

Our second 180+ team of Denis Fahey, Jack Yuen, Tom Richardson and John Broughton* finished in 6th place with a time of 50:16

(* John poured himself into Chris Bloomfield-Brown’s old skinsuit. It’s unlikely that CBB will be wanting it back).

Chris Mercurio, Saso Stojcevski and Matt Somerfield were not only down to 3 riders but were riding in the most competitive division of Masters Men All Ages (for reference this age group includes the winners Peter Milostic, Eddie Salas, Peter Wakefield, Paul Eberle)! They finished in a gallant 28th place in 52:22 vowing to come back next year stronger and faster.

Competing in time trials at this level is always a fun challenge. Thanks to Paul McKay for the organising and to all the riders that took part. Would be great to see a few more Waratah teams there next year. Especially our accomplished masters’ women riders – they would be strong contenders for a podium finish.

Racing tomorrow (22nd May) at Lansdowne has been cancelled due to waterlogged conditions on the track
What you need to know about the Track Championships 2022, 28th May