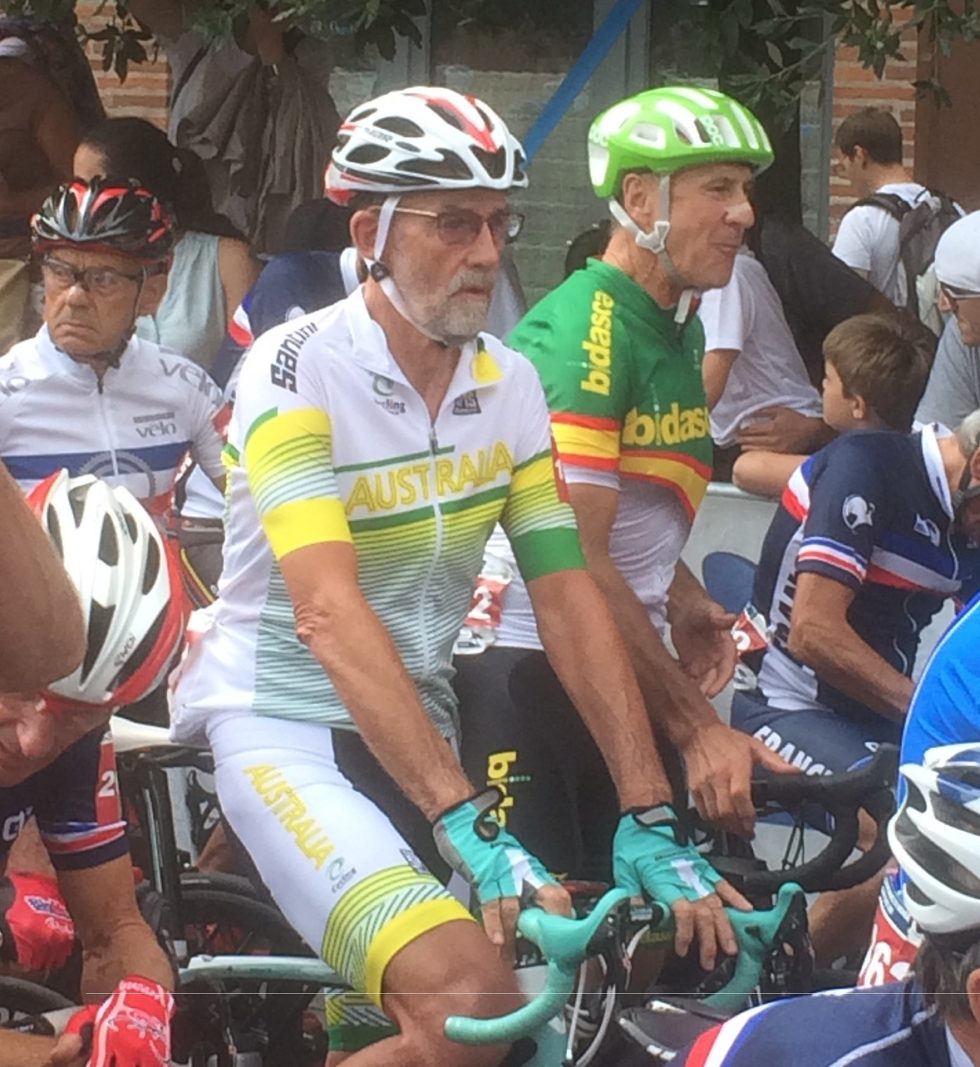 Hi once again to all the Waratahs.  Well the UCI Gran Fondo World Championships Road Race at Albi has been run, and won in my age group (65-69 years) by a Belgian rider, Rudolf Sluyts, who attacked in the last kilometres to win in great style in a breakaway.  Coming into the race I felt I had prepared well, was feeling in good form and thought I had an outside chance of finishing with the leading bunch. Before the race the word was out that the French would attack early, so you had to make sure you were up the front of the bunch to cover any move. Not easy to do, as there was a lot of pushing and shoving right from the start, even in first 2km neutral zone. A bit like the old fashioned scratch race on the track. I was well positioned on the start line in the top 20 of a field of more than 150 riders in the over 65 years groups and when the racing started, I was in the top 30. I didn’t look behind, as the pace was soon over 40km/hr and all you could hear was crashing and banging as we sped along the twisting roads towards Marssac-sur-Tarn. About 10km from the start, on a downhill curved approach to a narrow bridge, one of the more major crashes occurred bringing down several riders at the front. Thankfully I managed to avoid it.

Shortly afterwards we started into the rolling hills through the winery district of the beautiful Tarn valley. No time for sightseeing as the attacks were happening one after the other. At about the 25km mark we started one of the three major climbs of the race through the village of Campagnac, a climb of about 6km length varying in gradient from 2 to 7%. I climbed it well and this gave me the confidence that I could climb with the leading riders. I handled the next two climbs and subsequent long winding, fast descents well – the peloton spilt on the descent following more crashes, but I was still there. By this stage the temperature had risen to 36°C and the humidity was high, not ideal riding conditions. I was still part of the leading bunch after the last major climb at 25km to go, but 5km later there was a long 2 to 3% uphill gradient with a light cross wind. The pace went up and I found myself under real pressure. Heart rate very high, cadence high, legs hurting and, as a result, the back door of the bunch was open and I was going out. I tried a higher gear but I just couldn’t bridge the gap. I found myself in a small group, a lot of the other riders suffering dehydration and cramping. We chased, but were losing time very quickly because of our lack of riders who could work. It was a great relief when we finally entered the Albi Motor Racing Circuit for the last kilometre of the race and the sprint for the line. I finished in 64th place in my group and felt happy that I’d finished the race and given it my best shot.

The presentation of World Champion jerseys was begun by honouring Robert Marchand, a 106-year-old Frenchman, who was presented with his UCI Rainbow Jersey and Gold medal for the over 105 years category.  He was the only competitor in this division, and rode a course of over 20km to win this award.  The audience was very supportive of his solo effort, with several standing ovations for him through the presentation. What a moving event to honour his incredible effort and achievement.

We spent our last few days in France sightseeing, drinking those fantastic French cappuccinos and indulging in the odd nice diet-free meal. I really learned a lot about racing with Europeans and thoroughly enjoyed the experience, but am now looking forward to having a ride with the M7 group and a race with the Waratahs.

The Clubs Road Race Championships will be held this Sunday, 23 August, at Lansdowne. This…