Race in Sydney
with the Waratahs

Founded in 1994 on a long history of cycling, the Waratah Masters Cycling Club has grown to become one of the largest cycling clubs in New South Wales and hosts competitive road, time trial and track racing for club members and visiting clubs almost every week of the year. Find out more >

We take racing seriously, but we also enjoy our cycling and involve our club members regardless of their level and abilities. Find out more >

Open to riders from all clubs – women aged 19+ and men aged 30+ who hold a current race licence from Cycling Australia.

Pre-paid riders only (until further notice). 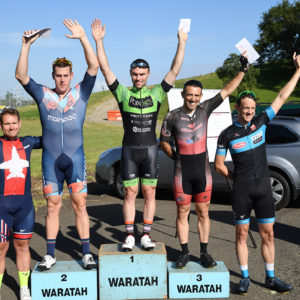 Waratah racing this Sunday is at the Eastern Creek Raceway (SMSP) and from now on all our races are open to all licensed riders. This includes both pre-paid and single race entries.

Single race entries on the day will be accepted providing:

All riders are reminded of the need to maintain social distancing and to not attend if you are sick or have flu like symptoms.

Thanks for your patience and understanding as we’ve adjusted our procedures to meet the new requirements. We hope you can join us for some more enjoyable racing.

The order window to buy Waratah clothing is now open for two weeks until 14 August. Now racing has recommenced it’s perhaps time to spruce up your kit or pick up a few additional items for your wardrobe. Here is the link to the site:

Champions dedicated Waratah ordering site hopefully makes the order process easy. If an item you’d like is not shown you are welcome to contact Champion (8030 7080) and discuss your needs.

You have the choice of having your order shipped directly to your home, for a small fee, or alternatively included in a bulk delivery that will be brought to our Sunday races.

Racing tomorrow has been cancelled. The forecast is very bad so we’ve decided to make an early call and allow people to make other plans or maybe get some more sleep. Hopefully see you at Lansdowne on 2 August.

Racing this Sunday is at Lansdowne and from now on D grade will revert to a 7.45 am start time along with C, E and F grades.

This is a result of strong race numbers in the higher grades which make it safer to return to our traditional grade start times. The revised grade start times are shown on our race calendar.

Hope to see you Sunday.

Waratah Masters CC  has been required to amend its COVID-19 Safety Plan in accordance with the Public Health (COVID-19  Restrictions on Gathering and Movement) Order(No 4) 2020. We have to:

i.      Ensure processes are in place to exclude participants (including spectators and officials) if they have visited Victoria in the 14 days prior; and

ii.      Ensure processes are in place to exclude participants (including spectators and officials) if they have attended any of the reported case locations listed on the NSW Health website (nsw.gov.au/covid-19/latest-news-and-updates)

Here is a link to the COVID-19 case locations: https://www.nsw.gov.au/covid-19/latest-news-and-updates

If you have been to any of these case locations you must not attend racing at Lansdowne tomorrow whether as a rider, spectator or official.

As part of the sign-on process you will be asked whether you have attended any of the places on the list of COVID-19 case locations.

Back to racing this weekend

Most of us had our last race on Sunday 15th March. I raced the B2B in Bathurst that day as the impending virus threat sent the world into lockdown.

After 16 weeks of hibernation, we are now allowed to return to a modified form of ‘life before COVID19’.

Since we are now back to racing, this 13th episode of my blog will be my last for season one.

I have learnt a lot writing these blogs and I still get new ideas popping up between my ears every day. I think I have been extremely lucky to live through a pandemic. It takes a crisis to unmask the structures of life that become shrouded by layers of artefacts built up by endless feedback loops.

As the road traffic thinned at the start of the pandemic, the paths filled up with walkers, skaters and bikes. Whilst I was basking in the luxury of riding on empty roads, I could not convince my wife to ride on the open roads. She is pretty nervous on her bike and she that is why she rarely rides during normal times.

So, at the start of the pandemic, we rode on bike paths.

On our first ride, we went to see the grand children at Greenhills Beach. When we made it back home at the end of the day, it was a 68km trip. Her e-bike was the only reason Shirley managed the monster ride…

Now we know that we can go out for rides together. The e-bike was the ‘lift’ that enabled her to level the playing field a bit and allow the two of us to ride at a nicely balanced pace together. She can even race me up the hills.

The reason Waratah Masters have 7 grades is that we all race at different levels. Some of us move between levels often and others tend to stay in a grade for longer periods.

This is also how nature works. Hierarchy is the structure that permits life to function in an orderly fashion. We cannot help but play at different levels.

There is no such thing as equality in the world we live in. Never in the history of mankind on planet earth have equal rights and opportunities existed. Where we begin in life as we pop out of the birth canal locks in the levels in life that we can start playing at.

Once I realised that I could move between levels (even though my playing field was not level), my game improved. I knew that with some ‘outside’ help, getting to the higher levels of the field was possible.

And when I got to the higher levels, I noticed that the game was not the same.

Playing up and down the levels

When Sunday comes around, I will be able to try out A grade racing again. I may find that after the pandemic hiccup, I will no longer be able to race at this level for much longer.

Playing any game at the highest level is extremely challenging – but it is the only way to access all the different levels below. An A grade rider can comfortable race any of the lower grades. Not so an E grade rider.

This is what the world is like. With an element of luck and lots of hard work, the A game players have the most options. They can choose to play at any level.

Then they start to grow. There is a theory that the support environment plays a large part in the pace and levels of growth in children.

When I play with my granddaughter, we either sit or lie down on the ground together. I consciously take myself down to her level. That is the only way to see eye to eye and have fun playing.

Further down the track, she will grow up more and the levels of play will upscale. And it will be a lot easier for her when there is a bit of support from someone who has a lot more points on the board.

Over the last 13 weeks, I have grown a bit putting these blogs together. I just hope that it has done the same to one or two of you out there who took the time to ponder what I was trying to transmit.

We all need support to move our game up a notch. And that support can only come from a lift – rather than a push. Nobody likes to be pushed.

Looking over the past into the future

I am grateful to the pandemic. Only a handful of the total Australian population get to experience receiving money from the ATO and federal government in the form of multiple ‘cash boosts’, ‘job keeper payouts’ and ‘apprentice subsidies’ … all dropping into their bank accounts.

I just happen to be one of these people. Grateful for the lift-up.

I never felt threatened by the virus.

But the pandemic has given me a far better appreciation of how the nature of feedback loops have caused the global lockdowns – rather than just the threat of a killer virus. I also have a better idea of how money can be created out of thin air. And why the world is not about to end.

The next 6 months promise some interesting revelations.

The Waratah Masters Cycling Club thank our partners and supporters: